To fuel my love I have been reading Reid Mitenbuler’s recent book, Bourbon Empire: The Past and Future of America’s Whiskey.

Early on, Mitenbuler introduces the first alcohol distiller among the British colonists, George Thorpe. Around 1620, Thorpe first distilled alcohol from Indian corn mash in the Berkeley settlement near Jamestown, Virginia. (See another account of this here.)

This wasn’t because without the distilled spirit the colonists would be tee-totalers. Nay. Mitenbuler makes clear that the colonists loaded their ships with beer for their trips across the Atlantic and to sustain them in the colonies.

Alcohol, then as now, was part and parcel of the everyday lives of people living on this continent.

Although I am still in the revolutionary era in the book, I expect that Mitenbuler will discuss the many personal and social ills associated with alcohol use. These, of course, led up to the historic and failed experiment with banning alcohol from 1920 (with the ratification of the 18th Amendment to the U.S. Constitution) to 1933 (with the ratification of the 21st Amendment).

Since the repeal of prohibition, public health scholars continue to document the toll that alcohol takes on individual lives and our society as a whole. According to the Centers for Disease Control, among the short-term health risks of inappropriate alcohol use are:

Despite this epidemic of alcohol-related problems in America, any person over 21 years of age can walk into most supermarkets, liquor stores, wine stores, beer stores, bars, or restaurants and buy alcohol. No “prohibited persons,” no permit required, no criminal background check, no mental health assessment, no registration, no additional fee beyond the cost of the product.

To see how easy it is to find alcohol in my quasi-homeland, I asked Google how many liquor stores there are in San Francisco.* Google returned the following map:

It is surprising that given the daily toll taken on individuals and our society as a whole that more people are not up in arms about this alcohol epidemic.

Of course, what could the people possibly do to resist the virtual ownership of the federal government by the alcohol lobby, which according to the Center for Responsive Politics’ opensecrets.org website had 292 lobbyists, $18.9 million in expenditures, and 31 clients in 2015.**

Thankfully, no one holds me — a responsible alcohol user — accountable for the mis-use of alcohol by (many, many thousands of) others. No one looks to me to be part of the solution rather than part of the problem. No one requires me to have a 0.00 blood alcohol content before driving because so many others drink and drive irresponsibly. No one asks me how many more people have to die before I, for the good of my fellow citizens, give up alcohol. (Because if we could prevent even one more death by instituting common sense alcohol laws…)

The problems associated with alcohol in this country also do not prevent me, thanks be to God, from being able to purchase and consume the product.

I am also extremely fortunate to have very generous friends who share my love of whisk(e)y with me. To wit: Last night my friend offered a bourbon and rye tasting competition between Tennessee-based Prichard’s Distillery and the Buffalo Trace-owned Colonel E.H. Taylor brand.

The clear winner was Prichard’s Double Barreled bourbon, so named because the spirit is aged once at 120 proof in new charred oak barrels (as is required by law to be called a bourbon), then cut to 95 proof and re-aged in new charred oak barrels. The double barreled aging and the relatively moderate alcohol content (in comparison to many craft bourbons today), 90 proof in the bottle, made this an easy-drinking bourbon. And somehow, despite being aged twice in new charred barrels, it was not overly sweet.

The name and label art was also a big winner, in my opinion at least, because I also love a double barreled shotgun. 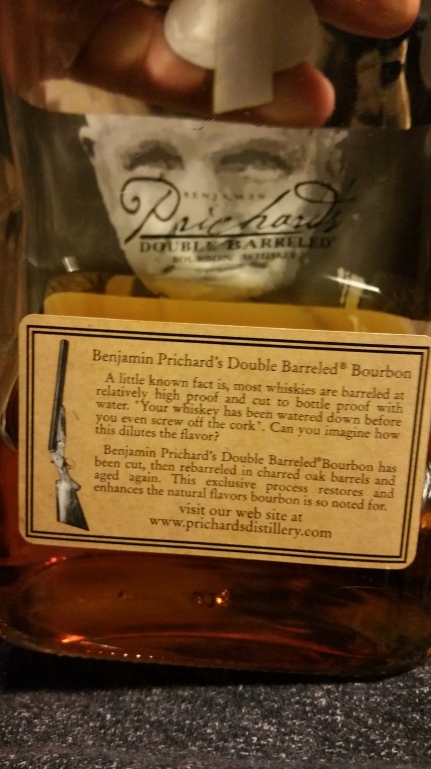 *San Francisco, the land of unicorns and rainbows, where the last gun store, High Bridge Arms, was just forced out of business.