San Francisco is a lot of things, but a hotbed of craft distilling it is not. So we made our way over to the East Bay to visit St. George Spirits. The distillery is on the north end of Alameda Island, in a hangar on the site of the former Alameda Naval Air Station, where you get a great view of the Bay Bridge and San Francisco skyline from the parking lot. 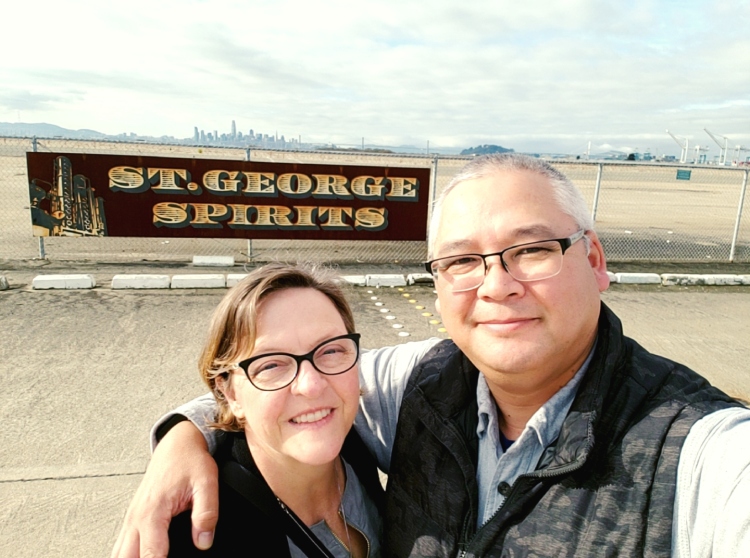 The Story: Founder Jorg Rupf grew up in the Black Forest in Germany and learned to distill at a young age. He later became the youngest judge in Germany and was sent to Berkeley to further his legal studies. While in the Bay Area, he began making “eau de vie” — a clear spirit distilled from fruit — in a 65 gallon Holstein pot still in Emeryville (coincidentally where I lived in 1988-1990).

The company takes its name from the Patron Saint of Germany, and may also be a not so subtle reference to the founder Jorg. Which may not be a stretch as Rupf is considered a founder of the modern artisanal/craft distilling movement in the United States.

Although I associate St. George Spirits with their gin because that is what I have had, it is actually their Pear Brandy which is their foundational spirit.

The Liquor: For $15, you can taste 6 of St. George’s 15 available spirits. Since I was there with my wife, our tasting guide suggested we split our tastings giving us 12 total. Which meant it was easier to say what we DIDN’T want to taste that what we did want to taste. We passed on two vodkas and one of the flavored liqueurs.

For a craft distiller, St. George has a diversified portfolio of spirits. Anyone who loves liquor can find something to embrace here.

Brown spirits aficionados who can’t find the rare St. George single malt (or “Baller” Japanese-style whiskey) can try the Breaking & Entering American Whiskey which combines the single malt with both bourbon and rye whiskey. It makes for an approachable drink.

The gins are notable for their distinct flavors. The terroir in the “Terroir” gin is Mt. Tamalpais, north of San Francisco, whose ridge line is visible on a clear day from the tasting room or on the bottle’s label any day. The predominance of Douglas fir in the aromatics is highly suggestive of Mt. Tam.

I took home two bottles from the distillery. First, the Bruto Americano, a “California Amaro,” because I love Campari. To my admittedly limited palate, it was as delicious as the benchmark.

I also took home a half bottle of the “brandy with herbs,” a.k.a., Absinthe Verte. I found the monkey on the label playing a skull like a drum with two bones to be appropriate since I sort of felt like that the last time I drank absinthe. According to our spirit guide, St. George made the first legal American absinthe after the U.S. ban was lifted in 2007.

I didn’t have much interest in the liqueurs, though people who like liqueurs would enjoy these. If I wasn’t traveling, I would definitely have taken home a bottle of the pear eau de vie — the brandy that made the brand.

The Visit: No tours are offered during the week, so we settled for the guided tasting. Our guide was at times knowledgeable and excited to share and at times distracted and sleepy. Even at his best, however, I always have an incomplete feeling when I visit a distillery and don’t get at least some tour.

Being able to see the working distillery through the large windows from the tasting area sort of added insult to injury.

Still, the tasting was amazing and a visit to St. George Spirits is highly recommended. Next time I hope we get that tour.