I just came across a review of some interesting work by my fellow sociologist of religion, George Yancey on religious and political bias in American higher education. 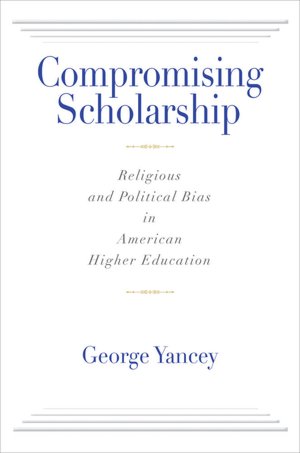 His book, Compromising Scholarship, was reviewed in a Chronicle of Higher Education Innovations blog post by Peter Wood called “Preferred Colleagues” (back in 2011 — I missed it!). Wood begins his review writing:

The study shows even greater bias against candidates with particular religious affiliations. Substantial numbers of the sociologists surveyed said they would be “less likely to hire” evangelical Christians and fundamentalists if they were aware that a candidate fell into either of those categories. Evangelicals face the barrier that 2 out of 5 sociologists (39.1 percent) are disposed not to hire them. Fundamentalists fare even a bit worse: 41.2 percent of sociologists say they would take such an affiliation negatively into account.

Imagine if you were to combine some of these categories of people — because, of course, we do not exist as separate variables in real life. Someone who is an Evangelical is more likely to be a Republican is more likely to be an NRA member. So, imagine asking sociologists to consider hiring a Evangelical, Republican, NRA member. Not going to happen.

I know in my own job interviews way back when someone at Notre Dame asked me if I was a “Catholic Restorationist” (whatever that is) and at another school I was asked to talk about what political magazines I read. Studying religion in general is suspicious to many sociologists, especially if there is some thought that the study has roots in some personal connection to religion.