As part of my ongoing effort to understand “Gun Culture 2.0,” I was fortunate recently to host a leading sociologist studying American gun culture, Jennifer Dawn Carlson. 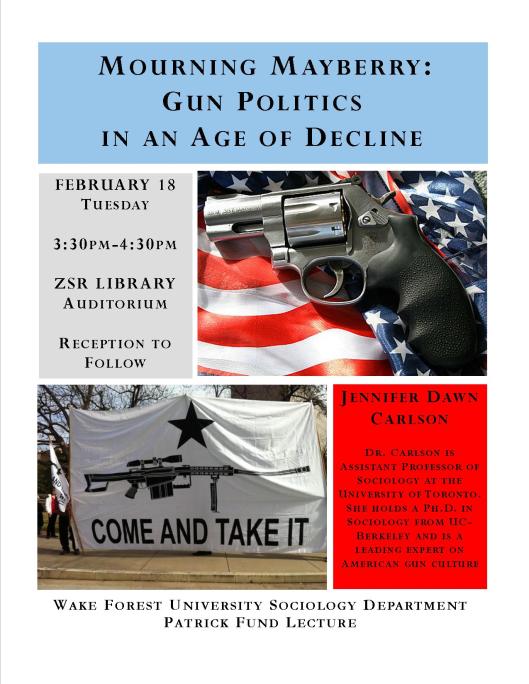 Dr. Carlson is an assistant professor at the University of Toronto, but despite working north of the border she is an American and primarily studies American society. She has published a number of newspaper opinion pieces which attempt to speak across the divide between “pro” and “anti” gun camps. Among these are: “The Gun Debate Misses the Mark in Detroit” in the Detroit News and “The NRA’s Hidden Power” in the Los Angeles Times.

Carlson’s presentation last month was based on ideas she is developing in a forthcoming book called Citizen-Protectors: The Everyday Politics of Guns in an Age of Decline (Oxford University Press, 2015). The book draws on research conducted on gun carriers — both open and concealed — in and around Detroit, Michigan, hence the “age of decline.” She argues that within the context of socioeconomic decline in general and personal decline experienced by men in particular, gun carriers reassert their relevance by identifying themselves as “citizen-protectors” (her term, not theirs).

In Carlson’s analysis, the social identity of the citizen-protector: (1) “Redefines lethal shooting, under certain circumstances, as a morally upstanding response to violent threat and an affirmation of one’s love for life,” (2) “Draws on the duty to protect as a historically male-dominated social function,” and (3) “Emphasizes protection as an esteemed form of masculinity.”

Thus, to understand why a growing number of Americans are getting licensed to carry handguns in public (or are exercising their right to open carry without a license where that is allowed) requires getting beyond the gun itself. Carrying a gun is about more than personal self-defense; it is an assertion of “relevance, dominance, and dignity.”

One thing I find particularly valuable about Carlson’s work is her valiant effort both to understand where gun carriers are coming from and to explain this to those who come from outside the gun culture. Her ability to speak across the divide, I hope, is enhanced by the fact that she did all that she could (as a young female from the People’s Republic of Berkeley) to walk-the-walk with gun carriers. She got a Michigan concealed carry license and carried a firearm regularly, she became an NRA Certified Firearms Instructor, and she even open carried a handgun into a Detroit police station as part of a protest by open carriers. Short of actually shooting someone in defense of self or others, she did all she could to establish her bona fides.

Because I read it in draft form, I will not give away one of the punch lines to her book, but Carlson draws some important conclusions based on her time interviewing and hanging out with gun carriers. Conclusions she could only reach by hanging out with gun carriers. I am anxiously awaiting the publication of Citizen-Protectors to see whether those conclusions resonate with a broader audience.

One thought on “Jennifer Dawn Carlson on Gun Politics in America”