Skip to content
OK, so I thought I was going to be able to get a wi-fi connection at the Rome airport but no such luck, so I will have to post my Rome blog entries when I get back home.
I didn’t leave myself much time at the end of each day to write. Most days I was to breakfast by 8am and not back to my room until 9 or 10pm. I didn’t want to waste a single moment in Rome. So, this and the following posts are abbreviated overviews of my 4 days in Rome.
Monday: I arrived at the Stazione Termini on the Trenitalia from Assisi in the late morning, so I made the short walk to my hotel (the Yes Hotel) and stored my bags and headed back to the Termini to take the Metro to the Vatican. By noon I was at Piazza San Pietro (St. Peter’s Square), which is impressively large, though in proportion to St. Peter’s Basilica. The interior of the basilica is really beyond words. Highlights for me were Michelangelo’s Pieta and Bernini’s baldacchino over the Altar of the Confession.
After I made my way through the Basilica, I made the trek up to the viewing level of the coppola (about 450 steps up), which is almost at the top of the dome, from which I took the photo below. 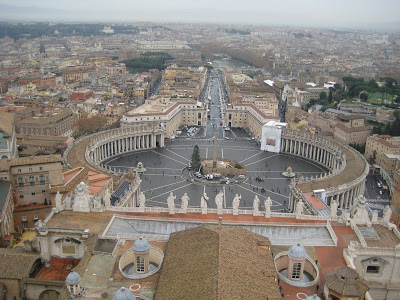 After my tour I wandered around for a while, had a couple of caffes, and went back to the Basilica for a Mass in Latin at the Altar of St. Joseph.
An easy Metro ride back to the Termini and a couple of slices of pizza — the first of many I would have in Rome — completed my first day.